Aroma and taste are perceived through our "chemical senses" 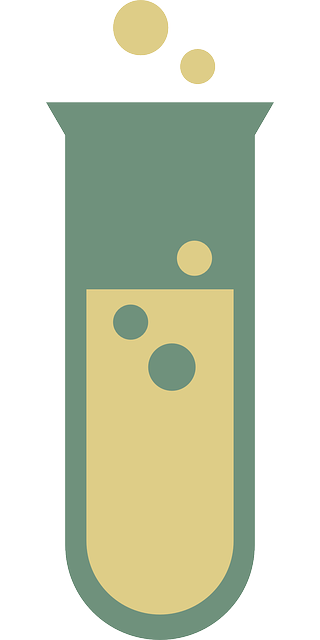 How do we perceive aroma, taste, and mouthfeel attributes?

Through our chemical senses! Olfaction, gustation, and sensations channeled via the trigeminal nerve. The only chemistry involved here relates to the nature of the compounds stimulating these senses. They are chemical molecules naturally present in wine: they are extracted from the grapes or are produced during the winemaking process.

This section gives you a short overview of the mechanisms involved through the chemical senses as they relate to your perceptions during a wine tasting. It will help you understand the good sensory practices described in the Tasting Basics and Wine Tasting Techniques sections of this website.

The sense of smell or olfaction is evoked by volatile compounds, that are able to reach the olfactory receptors located at the top of our nostrils. Volatile stimuli can be perceived directly via the orthonasal pathway (directly through your nostrils) or indirectly, via the retro-nasal pathway when the wine is already in your mouth. This is why wine perceptions are 80% olfactory in nature, because of these two ways of stimulations. Wine can account more than a thousand of volatile compounds that can evoke thousands of different aromas. Isn't it what we call complexity? 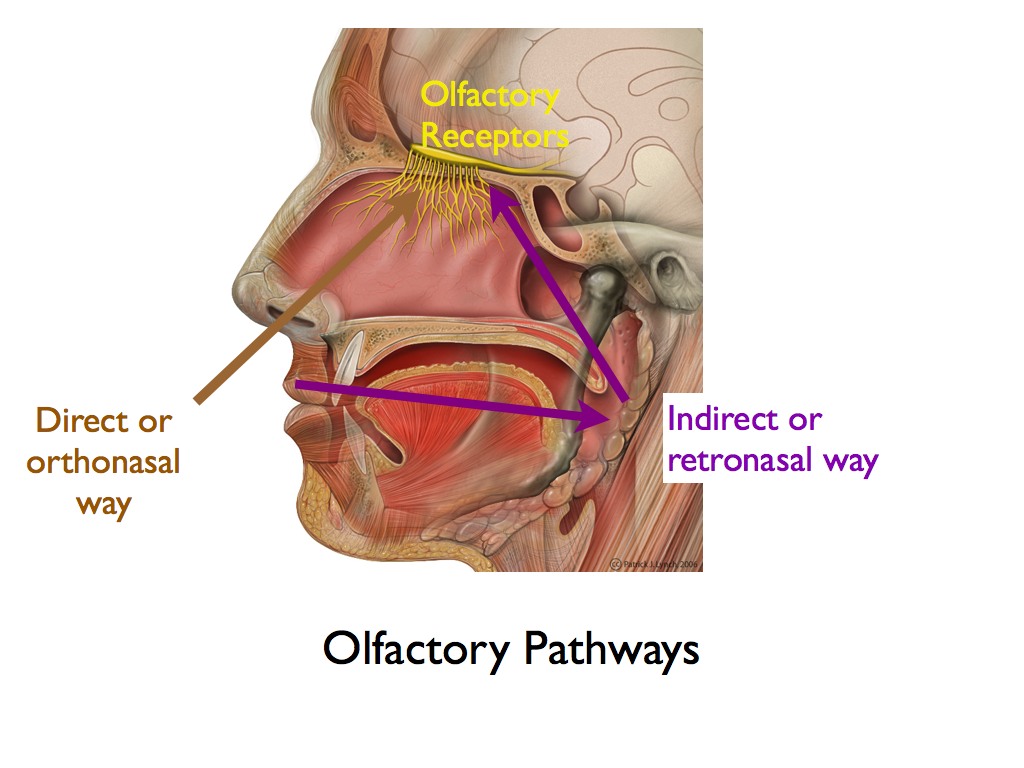 While there are cases where a given volatile compound is the signature of a given aroma perception, most of what we perceive when smelling a glass of wine is the result of combined compounds and their equilibrium with the other wine constituents.

This represents a challenge for us sensory scientists when we train people to identify the various aromas in wines. We like to use aroma standards that can evoke specific perceptions, whether they are pure compounds, or food flavours, or actual products. Below is a table showing some examples of these standards (Table 1).

Suggestions of aroma standards I have used in the past is available in the Wine Tasting Guide section.

Many chemists have tried to decipher the relations between a molecule structure and its olfactive quality. This is not easy. A same aroma can be evoked by molecules of very different structures. On the same vein, two molecules with very similar chemical structure can evoke very different aromatic perceptions. 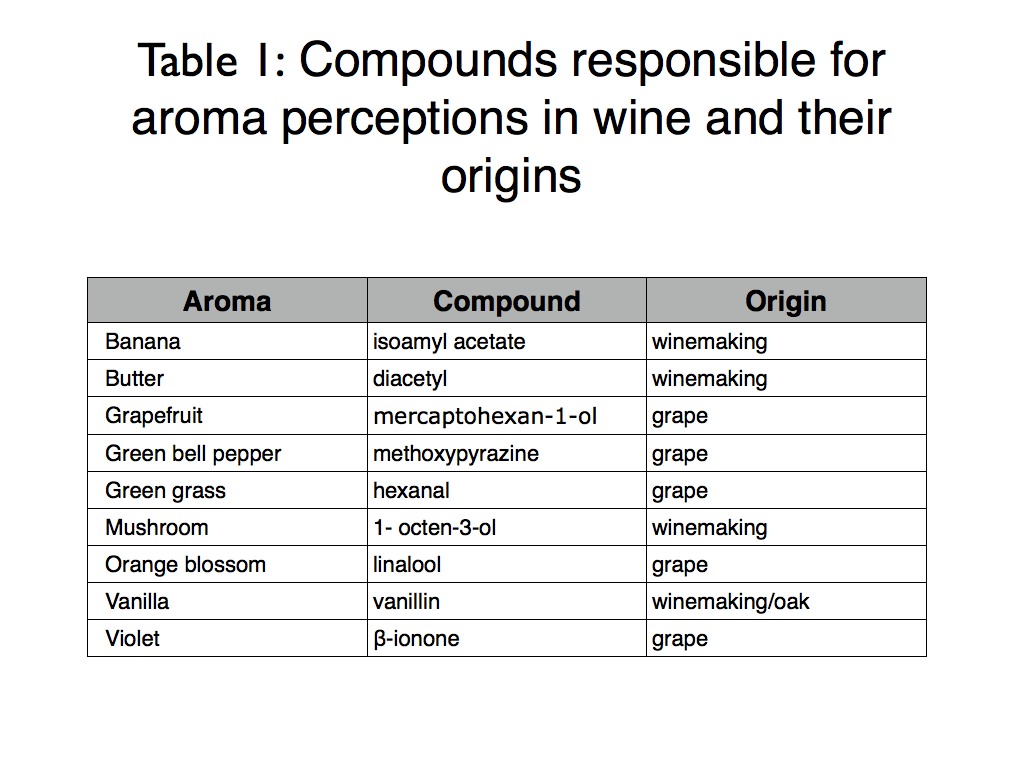 The "chemical sense" gustation or commonly called taste or is evoked by non volatile compounds, molecules or ions that stimulate receptors located at the surface of the tongue, as well as on the surface of the oral cavity and the pharynx. The receptor cells are grouped in compact formations called taste buds; each bud looks like an onion, with cells being the onion layers.

There are about 500 million gustatory receptors in human; 30 –80 per taste bud!

One can count 9000 taste buds in a human mouth. These buds are gathered into different structures called papillae (have you heard about the gustative papillae, that's what they are!)

There are four basic tastes: sweet, acid, salty, and bitter. Umami is now considered as a basic taste however its perception and recognition is culturally dependent. For example, the Asian cultures recognize umami as a single perception whereas Westerners tend to describe umami by the combination of two to three other tastes. To my knowledge, Umami is not encountered in wine.

Contrarily to the aromatic compounds, taste compounds are less numerous and are well known in wine as shown on table 2. 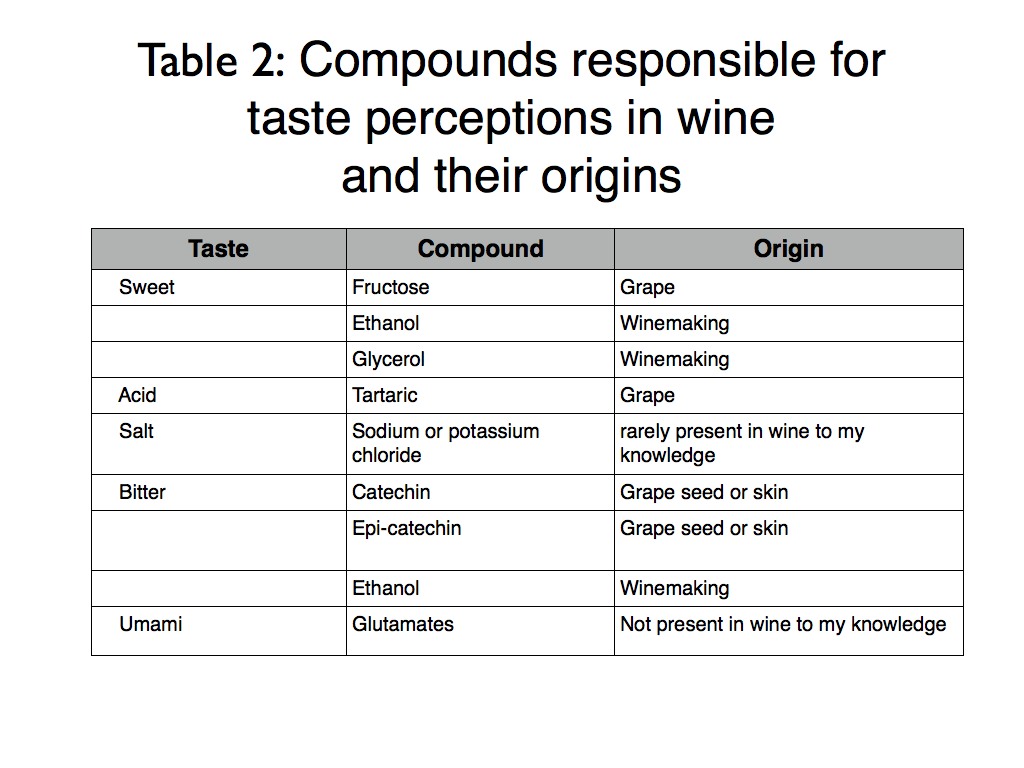 The tongue map illustrated below has been distributed and taught to many sensory and wine students...until one discovered that this map was erroneous, due to a poor translation from German to English. 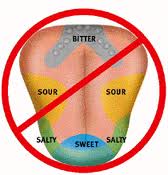 Indeed, the 8000 taste buds are spread all over the surface of the tongue, on its side, even at the beginning of the pharynx. All some receptors are specific to tastants, they are not grouped in specific locations as shown above. So, forget about it!

The best way to memorise how to identify the basic tastes is to memorise the sensations in your mouth.

Sweetness: sweet wines will evoke a sensation similar to sugary beverages and will provoke the production of thick saliva in your mouth

Acidity (or tartness): acid wines will evoke sensation similar to diluted lemon juice and will provoke the production of an abundant and fluid saliva in your mouth

Saltiness: Have you ever drinken sea water by accident? if yes, you know what it's like. If not, the sensation is similar to a vegetable or chicken salted broth

Bitterness: This sensation is evoked in unsweetened coffee or grapefruit. It seems easier for many tasters to perceive bitterness when swallowing the wine.

The trigeminal sensations are perceived via several types of receptors:

• Proprioreceptors (able to signal changes in position and movement)

For wine mouthfeel detection, these receptors are located in the oral cavity and at the base of the teeth.

Astringency is the most common perception in wine and remains a research topic of high interest for many sensory and neuro-scientists.

For more comprehensive descriptions of the physiological and neural pathways leading to aroma and taste perceptions, I invite you to consult the academic literature on chemical senses; some articles and books are listed in the tasting resources section.